On your marks, get set, go!

The Human Story, as Told by Our Genomes

by Jamie | As one of our wiser bloggers put it, "I doubt that STC readers are fo­cus­ed on­ly on mi­cro­bio­lo­gy. They must have other in­terests too." With that in­sight in mind, we're of­fer­ing up our im­pres­sions of a couple of books on­ly tan­gent­ial­ly re­la­ted to mi­cro­bes. In this case, a book de­scr­ibing the in­crea­sing­ly de­tail­ed pic­ture... Read more →

by Daniel P. Haeusser | As our readers are likely aware, we are holobionts whose functional genetic makeup goes beyond just the human cells. Not surprisingly, investigation of ancient microbial DNA (paleomicrobiology) can also help scientists understand human history and evolution. Read more →

by Daniel | The scientific pursuit does not occur in a social vacuum, dis­con­nected from our cultural experiences. At Small Things Considered, we usu­ally stick to the data and stay away from potentially explosive topics like po­litics. Sometimes we detour into historical context or con­sider bio­gra­phi­cal tidbits on the personalities involved... Read more →

Voices and Perspectives from the Past:
Memoirs of Scientists and Departmental Histories

by Daniel P. Haeusser | I started a draft of this post while sitting out on the Memorial Union lakeside terrace at the University of Wisconsin Madison. It was about halfway through the Molecular Genetics of Bacteria and Phages Conference, a fabulous and inspiring experience that Ananya Sen wrote about here last week. Originating in 1950 and born from the courses of the Luria/Delbrück-organized 'phage group' at Cold Spring Harbor, the early seminal Phage Conference meetings featured the birth of molecular biology through interactions between scientists now known as giants in the field. Read more →

by Brian Barry | A few days ago, my neighbor Elio came by and gave me a newly published book, "Life at the Edge of Sight" by Scott Chimi­leski and Roberto Kolter. He said that I might like it because it has a lot of pictures. After I thanked him, he continued somewhat slyly, "Let me know what you think after you've finished reading it." Read more → 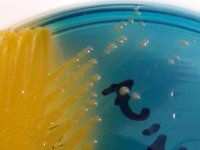 by Daniel Haeusser | In place of a weekly sermon this month, my church is having members give TED-style talks in their fields of ex­per­tise. Like the actual TED series, the idea is for speakers to share "ideas worth spreading", relating novel developments in their field that are shaping humanity’s view of the world, while also... Read more →

A Star-Studded Phantastic Voyage of Phages

by Jamie Henzy | In which the writer attempts to convey the abundant charm of: Thinking Like a Phage: The Genius of the Viruses That Infect Bacteria and Archaea, by Merry Youle. Read more →

by Jamie Henzy | Who isn't intrigued by viruses? Capable of wiping out entire populations, causing epidemics of biblical proportions, and wrecking crops, viruses entered the consciousness of humans because of their destructive potential. Too tiny to be seen, they were born from Koch's postulates, at first existing only in the imaginations of their early discoverers, such as Beijerinck, Ivanovsky, Twort, and d'Herelle. In the 1940s, electron micrographs revealed the first shadowy images of bacteriophage particles, and the eeriness of their outlines encouraged dread and captured the imagination of those who saw them. Read more →

by Daniel P. Haeusser | Today I wanted to catch up with some recent books that visitors to this blog may have interest in adding to their microbiological library. So here is a roundup of six academic microbial titles of note that make up a trio of related pairs. Read more →