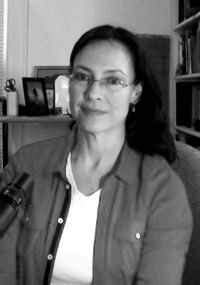 I grew up in eastern Kentucky. A love of languages, including how they evolve, led me to earn a B.A. in linguistics at the University of KY. Along the way, I happened to read Carl Sagan’s book, Broca's Brain, named for the main region of the brain linked to language production, and was complete­ly taken by the "romance of science". Afterwards, I made my way to Boston and weaseled my way into Harvard via a side door – the Extension School. There I moved one step closer to being a scientist, writing a master's thesis that blended Russian, biology, and science history. Then, while working as a technician in a gene therapy lab, I learned from my supervisor that verte­brate genomes are full of retrovirus sequences. This fascinating revelation led me to pursue Ph.D. work focusing on the evolution of retroviral enve­lope proteins, in the Coffin lab at Tufts. My current interests revolve around the manner in which viruses and their hosts shape one another's genomes, and the mechanisms of evolution involved in these interactions.

Along the way, I’ve always loved reading about science outside of the technical journals, where scientists are free to express their enthusiasm to anyone who will listen. I'm excited to be parti­ci­pating in just such a forum at STC.

I'm a postdoctoral fellow in the lab of Welkin Johnson in the Biology Department at Boston Col­lege. Find more on my website, or on twitter.